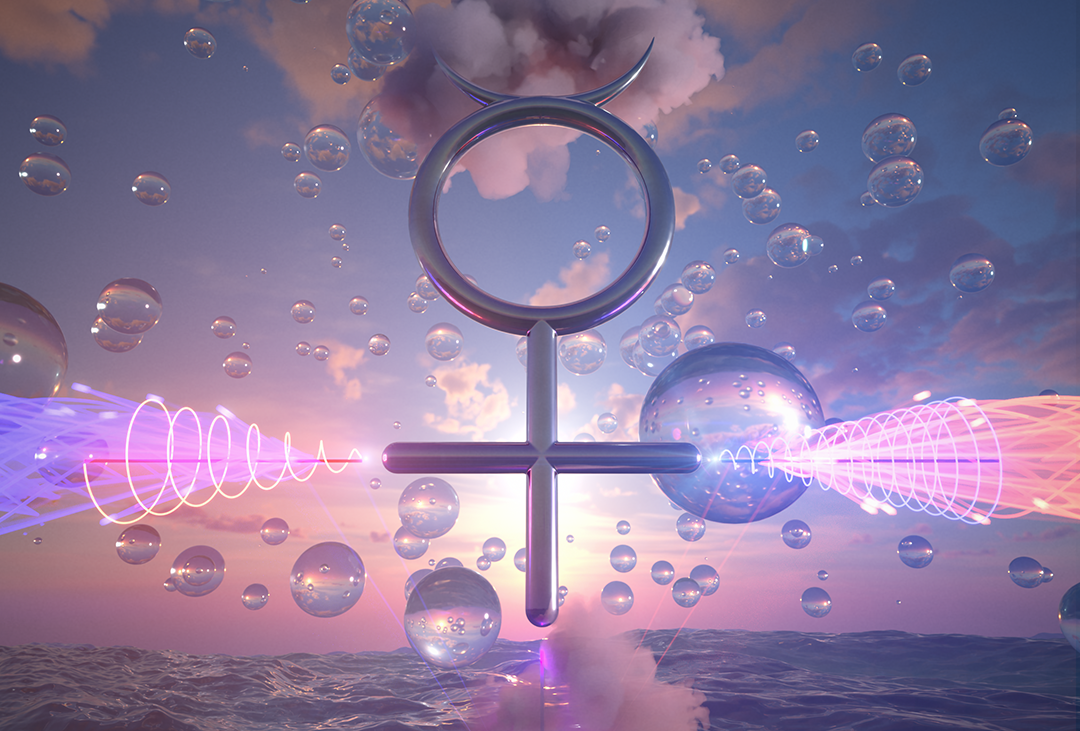 The SPIRIT of Alchemy

Alchemists were wise to secrete their teachings behind veils of “Jibberish” and carefully coded manuscripts – the religious sanctimony of the times meant that experimenting and discussing the Nature of Consciousness could cost you your life if it were determined to be apostasy, or sacreligious – a very real threat.

These days, there are fewer reasons for secrecy in most parts of the World. The mission of the Adepts has, in many ways, succeeded, and religious doctrine has been superseded by empirical transparent processes of knowledge, albeit the baby may have been thrown out with bathwater, somewhat.

Of all the nomenclature and jargon used in alchemical writing, none is perhaps as confusing as Mercury.

From the alchemical perspective, Mercury is the Spirit of any given material. Paracelsus explains it succinctly:

For Mercury is the spirit, sulfur is the soul, and salt is the body.

This just gives us an even more weaselly word to try to get to grips with – ‘Spirit’.

Oh my! Even Aleister Crowley felt trepidation approaching that topic, as he mentions in The Book of Thoth:

The idea of the Element of Spirit is very difficult to grasp…Generally speaking the attributions of the element of Spirit are not clear and simple like those of the other elements. It is very remarkable that the Tablet of Spirit in the Enochian System* is the key to all mischief; as, in the Hindu system, Akasha is the Egg of Darkness.”

~ Aleister Crowley, “The Book of Thoth”

Spirit can be defined as: “the non-physical attributes of a person, place or thing.” In people, this would be the seat of emotions, character, and the source of mind and ego. It’s a slippery slope, language, isn’t it? Now we have ‘person’, ‘character’, ‘mind’ and ‘ego’ to understand, multiplying our variables considerably.

If we’re not careful, Tarot can easily produce this result, leaving us more confused than before we consulted it!

‘Person’ – from Greek theatre, ‘per-sona’, literally ‘through sound’, meaning ‘the character represented by the voice of the speaker in a literary work’.

Today, in ordinary usage, it means ‘The role that one assumes or displays in public or society; one’s public image or personality, as distinguished from the inner “self”.’

Kind of the mask (like in theatre) that we wear for ‘appearances’, to let our ‘audience’ know which ‘role in the play’ we have.

So we could say it is the ‘public facing’ aspect of a Thing, as distinct from its ‘inner Being’, which is invisible, and has self-hood, which is unknowable without (honest and understandable) communication from the inner to the outer. That communication is the duty of Spirit, of Air.

‘Character’ – this is defined as ‘the aggregate of features and traits that form the individual nature of some person or thing.’

‘Mind’ – the faculty of a human being that feels, thinks, desires and imagines, and is the environment for all mental phenomena.

Animals probably (and seemingly) have some obvious form of this faculty also, though it is impossible to prove, and without language it is not at all clear that anything resembling what we would describe as ‘thinking’ is taking place in the brains of our animal brethren. Vegetation and minerals have ‘no brains’, and so it is not very materialist to suggest they may have minds.

Alchemists, however, are not materialists… 🙂

‘Ego’ – the identification of an individual with their thoughts, desires, imagination and mental phenomena as a ‘Self’ – distinguished from the ‘selves’ of others, and from the objects of thought in the mind. The ‘knower’, as the Rig Veda would have explained it to the Indian alchemists.

So, essentially, identification with thoughts and feelings and other phenomena of the Mind (also called the Spirit, the two are essentially synonymous), give rise to individuation, individuality, and thus character, creating the gestalt of the ‘Person’ or ‘personality’ – the perceptible outer form that ‘clothes’ the Spirit, the Mind, in direct communication with / with derivation from and of Soul – the unique blueprint of that particular form (including You as a particular form.)

Awaiting a daring spiritual rescue from a Cosmic Prince (while stuck, asleep, in ‘a Tower’, requiring the magical kiss of a Dream Lover to awaken from the magical slumber…fairy tales, eh? 🤔)

A quartet of ‘masculine’ – active – and ‘feminine’ – receptive – Soul, asleep and bound together, dreaming up everything in existence through their intermingling and, er, cosmic jiggery-pokery.

Mercury is thus the part of any given material that organizes the Logos – the inner dialogue of Soul. It acts as The Bridge between blueprint and final construction, communicating the instructions from the design to the eventual build.

This faculty is taken as an inherent power of Consciousness, of Sulfur – which, as we have seen, is the Soul.
Logos is a divine dialogue which Consciousness has with itself, in order to Create.

A story-teller, a messenger, even.

The one with author-ity, who delivers messages from one realm to another and back again, much like the demi-god that shares its name.

It was then discovered, by the Alchemists, that Mercury is intimately tied to Sulfur, that is to say, that Mind/Spirit is a function/quality of Consciousness itself – both acting as one to instantiate and maintain Creation.

Frater Albertus, a noted alchemist, observed drily in his manuscripts on alchemy:

Sulfur – that is, the alchemical sulfur – is usually found in its oily form adhering to the Mercury.

Like star-crossed lovers, alchemists consider these two – Sulfur and Mercury – to be entwined in a ‘sacred marriage’, intimately bound together in union. The two principles represent ‘masculine’ – that is, active – and ‘feminine’ – that is, receptive – faculties and qualities, always existing in a state of intermingled union, unless separated by Art.

Activity and Receptivity, joined in a ‘chymical romance’.

This is very much like the intimate relationship between Atu I and Atu II in the major arcana – The Magus (Magician) and The High Priestess, or between Atu III and Atu IV – The Emperor and the Empress, whose marriage we see in Atu VI – The Lovers, and whose union is consummated in Atu XIV – Art (Temperance).

Mercury is occasionally called the Moon, the Lunar, or Diana, Sulfur is the Sun, the Solar, Apollo, the original potency, the formative principle, the active, the principle of the “invisible fire” and also of love.

Deep meditation – and full experimentation, the precursor to what we now call Science – on this recognition of the affinity between the two principles gave rise to a truly radical further observation:

When brought together, the union of Sulfur and Mercury can lead to a reaction with the power to create a Salt – that is to say, a body, a physical manifestation. From the ‘oil’ of the Soul, and the ‘spirit’ of the Spirit – remarkably! – MATTER! Solid results.

The Union of Soul with its inherent quality of Spirit (or Mind), existing together, naturally and inevitably gives rise to the third Principle – Matter – which crystallizes from the interplay of Soul and Spirit, of Consciousness and Mind.

“We are all much greater artists than we realize”, as Friedrich Nietzsche might say, while killing God.

Sulfur is the Soul, Consciousness in Matter. Consciousness is the spark that actuates an individual existence from the Prima Materia. Mercury is the Spirit, the Mind, an inherent power of Consciousness, the description of the plan contained within Sulfur. Together, Consciousness and Mind have the power to organize and embody thoughts, cognitions, feelings, desires and imaginations, giving concrete reality to these insubstantial and immaterial phenomena. This leads inexorably to crystallization, in which the concretized yet immaterial phenomena form a Salt – a material body, corporeal, with dimension, and Being in Time and Space. A You and a Me.

This is literally ‘birthed’ from the reaction of the interplay of Consciousness and Mind, a.k.a Soul and Spirit, a.k.a Sulfur and Mercury.

And, the Alchemists contend, every type of phenomena -animal, vegetable, mineral, metal – can be attributed to this reaction and interplay, with startling conclusions, for those who truly understand, about the nature of reality.

It should be known that the life of things is none other than a spiritual thing. On this account there is nothing corporeal but has latent within itself a spirit and life, which as just now said, is none other than a spiritual thing. But not only the lives which move and act, as men, animals, worms in the earth, birds under the sky, fishes in the sea, but also all corporeal and substantial things. For here we should know that God, at the beginning of the creation of all things, created no body whatever without its own spirit, which spirit contains after an occult manner within itself. For what is the body without the spirit? Absolutely nothing. So it is that the spirit holds concealed within itself the virtue and power of the thing, and not the body.

In the final Part 4 of this short explainer on alchemy, we’ll take a look at the third alchemical principle – Salt – and see how it fits in with the Fool’s Journey in the tarot, and how to think about these principles in Tarot terms to enrich your scope and breadth of understanding of how to interpret the cards in spreads.