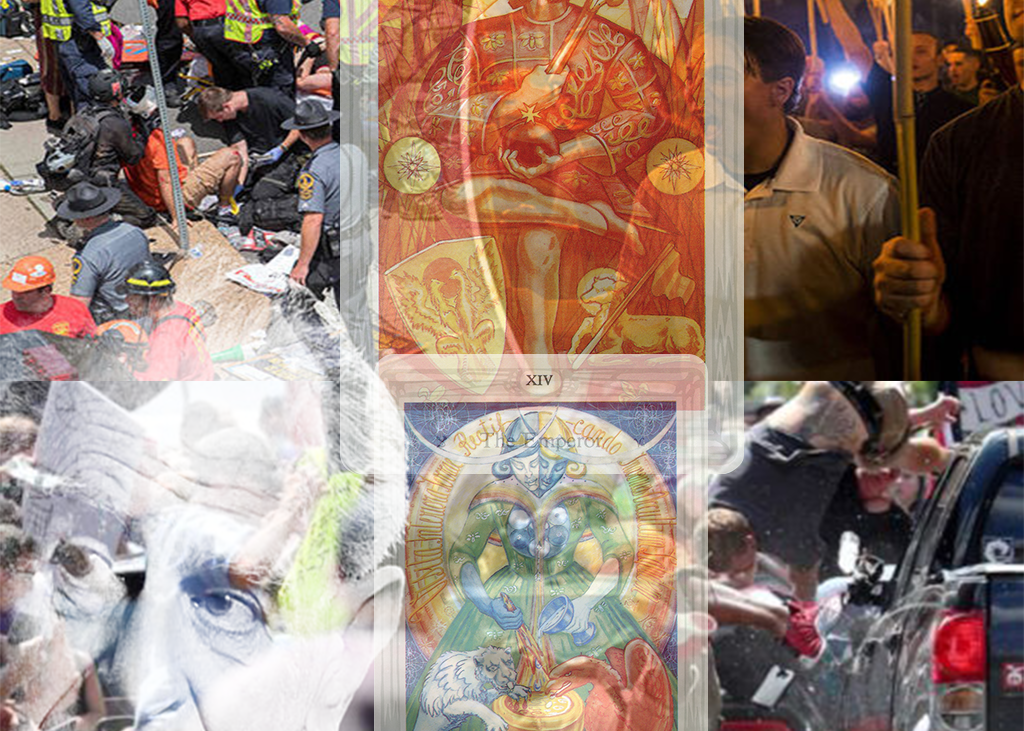 No doubt it has crossed your social feed at some moment in the past couple of weeks – the 20th Century philosopher Karl Popper’s famous ‘Paradox of Tolerance’ from his seminal book “The Open Society and its Enemies“.

The somewhat anachronistic scene of hundreds of angry young white American males goose-stepping through a small town in Virginia, USA, wearing the Swastika and chanting ‘Blood and Soil!’ – a famous Nazi maxim – along with other even less savoury slogans from the same creed, was hard to avoid or take seriously; right up until someone was killed.

In case you, like most normal human beings, skipped right on past it with a combination of bewilderment and disgust, the reason for the sudden popularity of Mr. Popper and his paradox was that it deals with precisely the conundrum being faced by the US in face of a resurgent, emboldened neo-Nazi base which supports Donald Trump as president, a country which – allegedly and in theory at least – prides itself on the value of Free Speech. Indeed, the US constitution legally enshrines the freedom to pontificate about whatever you may choose, without fear of repression by others or the State, in the very first Amendment to its founding Constitution. The amendment as adopted in 1791 reads as follows:

Congress shall make no law respecting an establishment of religion, or prohibiting the free exercise thereof; or abridging the freedom of speech, or of the press; or the right of the people peaceably to assemble, and to petition the Government for a redress of grievances.

~ 1st Amendment to the Constitution of the United States of America

Popper, in 1945, felt compelled to address the thorny issue this openness and tolerance of divergent views presented: if a society values tolerance and freedom of expression, what should it do when those freedoms are used to promote or inculcate a society of intolerance and oppressive, authoritarian censure which actively jeopardise its enshrined values? Can a tolerant society survive if it allows the spread of intolerance, and thus prohibition or abandonment of the very freedoms it values so highly? Was Voltaire high on opium when he declared “I may not like what you are saying, but I will defend to the death your right to say it!”? Or had he simply never been to Charlottesville, Virginia on a Neo-Nazi Friday night shindig which resulted in the death-by-vehicular-homicide of a counter-protestor looking to shoo out of town such openly violent, intolerant and divisive views and speech?

Popper himself concluded, paradoxically, that a tolerant society could not tolerate intolerance if it wished to survive intact.

He concluded that we are warranted in refusing to tolerate intolerance.

We should therefore claim, in the name of tolerance,the right not to tolerate the intolerant.

Not wishing to get into the nuance of protected speech, yelling “Fire!” in a crowded building, or whistleblower persecution and that whole thorny thread of philosophy and law which admittedly bears much relevance to the overall debate, let’s instead narrow and occult our focus and consider the issue from the perspective of the Tarot. Let us consider the very-far-from-humble number 4, and it’s decades in the Major Arcana – specifically The Emperor Atu IV and Art (or Temperance) Atu XIV. If there’s time, we’ll peek at the Minor Arcana too, and how it is influenced by the Majors.

4 is a number of stabilization, balance and form. It is Σ10 (Sigma Ten) – 1+2+3+4=10. It contains the blueprint of the finished cycle. It is the organizing centre from which the completed manifestation proceeds. The Emperor takes care of the application of Cosmic Law to the Earthly Plane; He is responsible for the correct operation and function of the World. Dependable, stoic and unafraid of conflict, we can count on the Emperor; we know that He is up to any challenge. Representing an unshakeable reality principle, and grounded, stable Power, he manages material strength-in-action and his sacred Duty is to protect others. He governs, sets boundaries, and civilizes. He rules with Justice and Mercy, but tends toward Justice unless restrained. He’s usually itching for a fight. He doesn’t back down. He sees all your weakness, but never weakens.

So far so good. The Emperor ensures that all views are given fair hearing, that sauce for the goose is also sauce for the gander, and that where conflict or struggle may erupt, Power stands by to keep the Peace and allow the Politic to flourish. This is The Emperor. This is 4. The rod or the carrot, the point is rulership. Governance. Security through Peace – albeit via the threat of all out War (The Emperor is Aries, ruled by Mars – Atu XVI The Tower). The Emperor’s ultimatum is “Or else!” He is Society’s, and your Inner Policeman.

Art, or Temperance, Atu XIV, is the second Decade of 4 in the Major Arcana. Art brings bevels and curvature to the sharp, Platonic cube of the Emperor’s domain and throne. Art softens the right-angles and files down the brutality of such Power, it adds fleur-de-lhys and iconography to beautify, and represent, and abstract. Art adds what is missing from this Sacred Recipe: to concrete Earthly security is blended an abstract Spiritual security, intimate knowledge of the Self achieved through introspection, and great equanimity in the allocation and distribution of such terrible Power. Art introduces the Mystery: The Circle of Spiritual Protection into the Square of Earthly Power. Art is Sun Tzu, or Machiavelli, when applied to the naked furore of the Emperor. Art is brinkmanship, and avoiding conflict through skillful means, or at least ensuring the odds swing wildly in your favour before issuing threats. Art does not like to threaten, but to unite, so solve and absolve. Art seeks Union, Art remembers Love, and understands that ‘only Love can Unite the Divided’. Art is the Emperor and Empress finding perfect balance.

If Art is not present to support and guide the Emperor, then, like Churchill’s apocryphal utterance:

What are we fighting for?

The Emperor without Art will fall – easily and terribly – into dictatorship and tyranny, exalting the material and rational, the exterior, at the expense of all other considerations, becoming obtuse, denying the virtue of the soft and yielding, of the interior, and – losing kindness – loses Himself. Bureaucracy that is a satire of itself erupts. “Your papers, please!” Soon, He ceases to concern Himself with the Other at all, never mind the Other in all of its unique, independent Truth. He goes mad with his own Power.

Without the Emperor’s principles and grounding in Reality, in Earth, Art is mere illusion: smoke and mirrors, or mal-adaptive magic, even. Spirituality as fanatic faith in a chimerical Heaven, a passing and soon finished-with Dream of Something Better, with no anchor at all in the incarnate, the here and now, the dirt that we’re made of, and oh-so afraid of. Art then becomes an excessive kindness, a ludicrous extension of principle into a headlong collision with Reality, an affectation of love and compassion which protects the useless and useful alike, which harbours the Evil and the Good in the same refuge in the vague hope that everyone can just Get Along. Then, the grip on reality becomes tenuous and notional, and as we lose purchase on such ephemera as tolerance, the ability to distinguish and discern the very causal phenomena that are essential to understand if we are to embody social intelligence and basic common sense also slips through our fingers. Art then becomes Platitude, Wisdom-Quote, garbled New Age bollocks.

Like a tree which must send deep roots into the Earth if it aspires to higher and higher growth, the Emperor and Art must collaborate on notions of social order. Slapping violent rhetoric which openly seeks the oppression of the Other into the same discourse as equally violent rhetoric which – nonetheless – openly opposes oppression and threats of violence against minorities and under-represented parts of the body politic is an utter failure of the Emperor’s necessary influence on Art. Equally, allowing openly armed militias to parade around in quiet University towns threatening queers, jews, blacks and journalists is a staggering failure of Art’s necessary influence on the Emperor. The media are hugely culpable in this mutual failure of imagination, boundary, and application of abstract Law to Earthly issues. The media should help support and provide the Art, but have been co-opted as an extension of the Emperor’s peculiar concerns.

And so, the ill dignities of the Minor 4’s. Right in the roots, the 4 of Wands is an affliction rather than a relief. The creativity of the People is held captive in monotonous routine, commerce becomes an end in itself rather than a means to liberty. Bullies flourish, dominator characteristics are rewarded and the weak are afraid and not up to the task of challenging errant authority. Rather than the diplomacy of Venus in Aries, the original Will continues to push, push, push. Strife, the 5 of Wands, is beckoning.

The emotional instability of the 4 of Cups cannot cleanse this malaise. It too is heading for the evaporative heat of the 5, ‘Disappointment’. The storm that is gathering in the background of the card is ominous, like that moment in an 80’s horror pic when badly composited clouds gather around the town heading for disaster. The People have placed their faith and hope in the Other, and the other is not up to the task. Everywhere there is insecurity, lack of freedom, smothering and overt materialism.

This unfortunate alchemy of Fire and Water can only produce foetid and noxious gases in the Intellectual realm. The 4 Swords, crossed in apparent ‘Truce’, are obtuse, unfeeling, fixed and dogmatic. The mind is a prisoner of its concepts, and everywhere the inexperienced espouse theories of which they have no living notion. There is much bluster, but mostly it is all talk. Heels are dug in, and nobody wishes to contemplate the other view, or live in the other’s shoes. Apparent peace can any moment erupt into violence and loss. The 49 petalled rose in the centre is fragile, false, enforced by a sharp, double-edged Doctrine that cannot know Love without a modification of its constrainsts and stubborn intransigence. Here is fanaticism and closed minds.

And so, the crystallization, the vibration into the manifest ‘Power’ of the 4 of Disks. Never mind a man’s home being his castle. This is the prison-industrial complex, this is Abu Ghraib, this is secret renditions and torture camps. Material stagnation ensues: obesity is the number one malady afflicting the richest nations on Earth, that and loneliness. Everywhere, Spirit is trapped in Matter, and there is little sign of Redemption. Immobility restricts ingenuity and flexibility. Money is elevated to Golden-Calf styles of worship, while economies stagnate and prosperity implodes. The Mantra of the sealed family is ‘I’m all right Jack, so fuck you!” It crescendos into a National anthem, as nationalism and bigotry rises and festers.

The biggest problem, plain for most to see, is that the current Emperor has No Clothes. He is no Artist.
And so, the Empire flounders, and with it the civilized convulses and will, eventually, die.
The Hierophants he has surrounded himself with are mostly nutjob evangelical Republicans from the so-called ‘Christian-Right’, a misnomer if ever I heard one.

Look to the balance of the Art in your Empire, look to the presence of the Empire in your Art.
Material and Spiritual Law require agents of enforcement, else the ‘contract has no teeth’.
Be one.

Bevel that cube, but square the circle while you are at it.
And for the sake of all that is Holy, stop sharing Wisdom Quotes on Facebook.