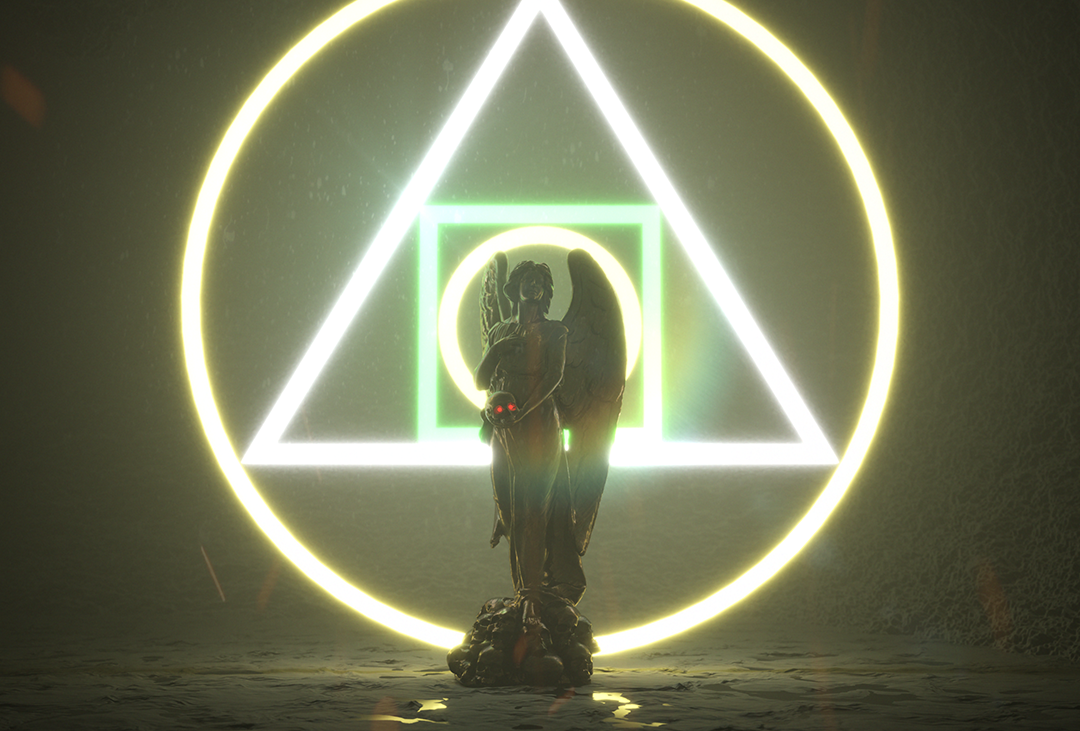 In the simplest possible terms, Alchemy is a praxis which seeks to understand the relationship between Consciousness (“I AM”) and Matter.

Easy to dismiss as either pre-scientific chemistry, concerned only with bubbling potions in vain attempts to ‘transmute metals’ from lead to gold via the famed ‘Philosopher’s Stone’, or as poetic New-Age nonsense referring only to allegories and metaphors about ‘personal growth’, that are best discarded for more modern technologies of the Psyche, it is in fact something more profound and coherent than either.

Alchemy throughout human history has been concerned with the essential relationship between the immaterial and the material – the Spiritual and the Physical.

It has sought to bring about – via experimentation – understanding of how human beings can fully participate in the tremendous powers of transformation apparent in Nature.

That miraculous ‘One Thing’ spoken of in the Emerald Tablet is, in fact, you.

The Point in the Circle, infinitesimally contracted and Infinitely Expanded at the same time. Pulsing out Time and Space, in, out, create, maintain, destroy, 1-and-2-and-1-and-2-and…

These are both considered to be essential aspects of the Self. You, as a cartographer between the Infinite and the Infinitesimal, making your own maps of meaning, and seeking your own progress.

The Above can be thought of as the Kosmos/Self –
all that Can Be, Unidentified, The Infinite Self, Imaginal, Unbound

The Below can be thought of as creation/self –
all that is, experienced, the finite self, manifest, bound.

That’s You, from the Above to the Below.
Capable of either, or both.
Circle/point.
Utriusque capax.

This Association between the Infinite and the infinitesimal– an association we refer to as Consciousness – which is You – is the Self/self.

The Infinite contracted to the infinitesimal, in order to adopt a point of view.
The Self to the self, creating everything in between.

Your current ‘experience’ is the ‘m’ part of the interchangeable equation E=mc², which basically says ‘matter is energy slowed down to nothing, and energy is matter (mass) accelerating to infinity (the speed of light multiplied by itself – an unimaginably huge number)’.

I am. I Will be. Selfhood. That creepy, undeniable Is-ness of your basic conundrum.

Taken from an Infinite source – the Kosmos – and reduced to a little bounded manifestation with a point of view, and yet able to relate to its association with the Infinite, the unbounded.

Another way to put this – germane to Tarot study – would be the 10 considering its origin as the 1 (out of 0).

The ‘You’ I am referring to when I say “that’s You” is not the you in your little body with your daily toils, alive now, and certainly not the entire Universe throughout space-time – which would be a bit silly and hugely cumbersome – but the association between finite and Infinite, which association can only be experienced by the finite, as Consciousness, in the ever-present Now of Infinite Creation.

Alchemists posit that everything in existence, all Being, has 3 fundamental qualities, with the first 2 absolutely co-dependent, and necessitating and naturally crystallizing, the third – through their innate, eternal action- in-union.

These are referred to – deliberately confusingly – as Sulfur, Mercury and Salt.

As familiar as these common enough substances may be to a modern – and even medieval – sensibility, alchemists were speaking about something very specific when using these code-words in their manuscripts. The ‘Substances’ they referred to were not so common, or simple to identify. Hidden from the profane and the inquisitive alike, but right in plain view if you happen to have the Key…A Key which Tarot very readily supplies, for the initiated.

We’ll discuss them individually in parts 2,3 and 4😊

Let us – literally – PULL OURSELVES TOGETHER!

* The Above is represented in the Thoth tarot as Nuit, arching her back around Infinite Space.
She is the Circle, Infinite, Encompassing All.
An Inner World without Boundary, ‘the Macrocosm’, the Ideal.

The Below is represented in the Thoth tarot as Hadit, the infinitesimal point, lacking dimension.
He is the Dot, Compressed to a tiny Nothing, Individual.
The bounded World of phenomena, ‘the Microcosm’, the Manifest.

Both symbols are present on Atu XX, The Aeon (the Judgment) – which destroys ‘the four elements’ and the ‘time-and-space’ created by Atu I, The Magus, re-initiating the whole cycle of creation-destruction.

They show up individually on other cards, for the sharp-eyed 😉